See the Balloons get blown up for the Macy’s Thanksgiving Day Parade! 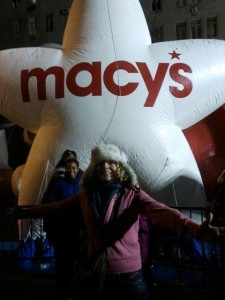 Now I know this is Day 32, and Day 31 was also about the day before Thanksgiving…but I’ve been busy (you know, with stupid work so that I will have enough money to achieve my other goals…and will have something in the bank in the event that the World doesn’t explode or is taken over by Alien Zombies…or if it is taken over by Alien Zombies I can buy them off with the $24 I have in my savings account) and had to combine a few things

Now back to my story:

The Flat Girls and I hopped on the subway down to 79th and Central Park….

After finding our way through the crazy subway traffic (stupid toddlers walking all slow), we happened upon Papa Smurf! 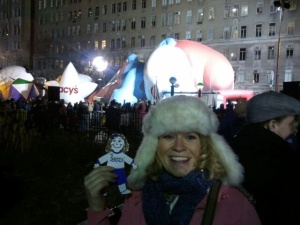 Here’s me in front of Mr. Kool Aid dude riding a skateboard (Why is he on a skateboard?  I have no idea.  Maybe he took a trip to Brooklyn and found the skateboarding hipsters fascinating…and maybe next year he’ll show up with skinny jeans, quirky glasses, and a beard).

Here I am in front of Charlie Brown.  The funny thing that you’ll notice about getting your photo taken when you’re in the middle of a huge crowd of tourists (and there’s giant stimulation of mildly-rememberable-cartoon-character-balloons), you tend to be photographed next to other people (usually children or annoyingly adorable families) also getting their photos taken.

Here I am with the Pillsbury Dough Boy…

And here I am with my favorite…Santa Claus!

Have a Happy Thanksgiving everyone…let’s hope it’s not the last!