What did I do with one of my last lazy Sundays before the Mayan predicted apocalypse?  First, I broke the Christmas movie seal with Home Alone.  Then I took a 3 hour nap.   Then I watched Liz & Dick on my DVR (I’m lying.  I am embarrassed to admit that I did DVR Liz & Dick, but I haven’t brought myself to watch it…mainly because the title is silly… and Lindsay Lohan is a tool).  Then I realized that I haven’t done anything to plan for the end of the world since my Thanksgiving feast.  So (after pouring myself a glasses of wine), I looked at the Calendar and figured out the best date to plan my EOW/30th Birthday party. 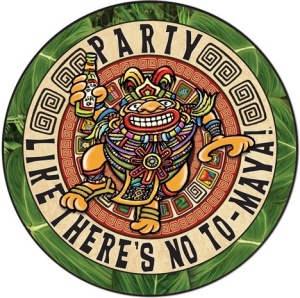 Where: You think I’m gonna post an address on the interweb for the whole world (10-12 of people who already know where I live…plus the 3 people from Tanzania that are apparently following my blog) to see?!

Who: All of my awesome friends, family, and chinese food delivery workers that are off on a Monday nights.

“Sarah!  You’re really going to throw the last most awesome party of the world on a Monday?  That sounds like a bad idea.  Wouldn’t you rather do it on a Saturday?  Plus, how’s your love life?”

Alright, theoretical voice.  My love life is none of your business (non existent), and I’ll tell you why I’m throwing it on a Monday.  It’s because almost all of my  friends are employed in one of the following:

1. Theatre (which is off on Mondays)…

(Shout out to the ladies of the Flatrock Playhouse’s production of Chicago!)

2.  Restaurants (where Monday nights are dead, and the people that are not afraid of the world ending won’t lose out on Friday or Saturday night money)… 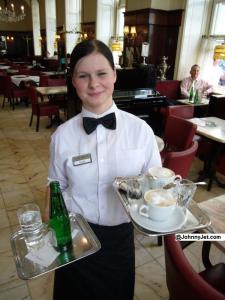 (I don’t know this person.  I just google imaged waitress.  In my mind her name is Claire and she went to AMDA)

To fit all of my friend’s needs I decided a Monday night party would be most conducive for all of the above.

So, to all my dear friends (and people that I don’t really like that much but  I’ll probably invite just in case the people that I do really like can’t make it so I still seem really popular in case Tina Fey shows up) expect an Evite or annoying facebook mass message about the party by the end of the week.  And to all 3 of you readers that I don’t know personally, I’m sorry but I can’t invite you unless you pass a rigorous background check to prove you’re not a serial killer or extreme coupon-er.