So, my endless amount of free time has been not so endless. At first, I thought this summer was going to make me so bored that I’d end up cutting off my own arm, bind down every finger but the middle one, and turn it into a weird art project for my desk that evoked “Just enjoy this free time while you have it moron. You’re such an anxious prat when you have nothing to do, so now you’re going to be forced to do it, and with only one arm…and that arm is flipping you the bird! Bwahahaha!” You, know like needlepoint, but edgier. As it turns out though, when you don’t have any daily obligations like walking a dog (she’s with my parents for the summer harassing goats) and 12 – 14 jobs, your time can still get pretty eaten up when you spend it eating with friends!

If you have known me at anytime between the year 2001 and last week, you’ve fallen victim to my perky catch phrase “I don’t have time!” It seems like a super sad catch phrase but can come in really handy. Take these examples: “Can you come to my beach party?” “I don’t have time” seems sad. “Can you come to my b*tch party” “I don’t have time” is a great save, and “Can you come to my beach farty?” “I don’t have time” can save a life (for you writing novices out there, comedy is written in 3’s which is why the above example is hilarious to you. Also the word farty is classically funny, thought provoking, and rhymes with party. I’ll be offering a comedy writing course in the fall, see my secretary Larry for more details). Now, don’t be a turd-waffle when you use my catch phrase please. Every time I’ve used it, it has been wildly true. Again, 17-19 jobs is a lot for one gal to have, and all of my jobs are creative, so when I’m not at work I’m home creating the work which is a vicious cycle not unlike a bike ridden by a T-Rex. Ha!

So, since my last post I’ve abolished my catch phrase and taken a lot of time visiting friends and eating stuff. Here’s a little peak into my life from the last week…

I met up with my fave couple Abby and Shaun who are getting married next summer (and yes, I will be offered a plus one to their wedding, so get in line fellas…except for you Larry, so stop asking). We ate some complimentary cheese balls and discussed foreign policy (fine…ok…you call my bluff you testy readers…we talked about fallopian tubes and theatre gossip…because we like to make Shaun sweat…but we did eat a few cheeseballs…ok fine again…we ate all the cheese balls before this picture was taken so I had to enhance with my own art (watch out Pixar!) for posterity…but I think we can all agree that Shaun is sweating his cheeseballs off!). 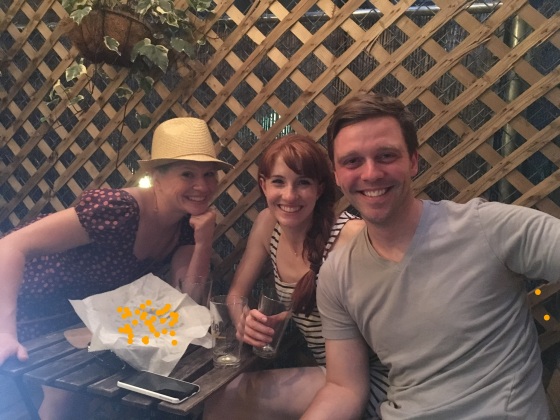 From Left to Right: Me, balls, Abby, Shaun, balls

Next up was a brunch date with some of my coworkers from the gym.  These ladies know what it’s like to have 23 jobs at once so we’ve made it a pact to drink bottomless brunches together and slap each other across the face when we hear, “You know, I just got offered this crazy gig, it doesn’t pay much but (SLAP!)” Other acceptable scoldings include waterboarding, snow blinding, and side planking. We like to keep it fresh. I love these women to the moon and back because they are strong, photogenic, and not afraid to take their chances with dogs tied to street signs. 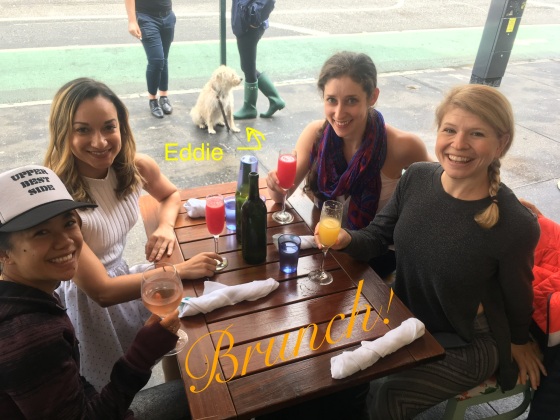 From Left Clockwise: Laura (likes to make her own hats), Lisa (dares to wear a white outfit whilst drinking pink things), Eddie (name we came up with for the dog who has been left tied to a No Parking sign while his owners had omlettes), Julianne (just snapped my bra because I told her someone offered me a gig babysitting iguanas), Me (practically perfect in every way).

From Left to Right: Beauty and the Beast

Last up was time well spent with a new friend of mine who has the one thing that guarantees our relationship outlasts the test of time…a Costco membership.  For true friendship is with someone who is willing to split 42 rolls of toilet paper and an 8 pack of chick peas while guarding the free sample stations as a chubby woman in a hairnet spoons macaroni salad into a dixie cup. 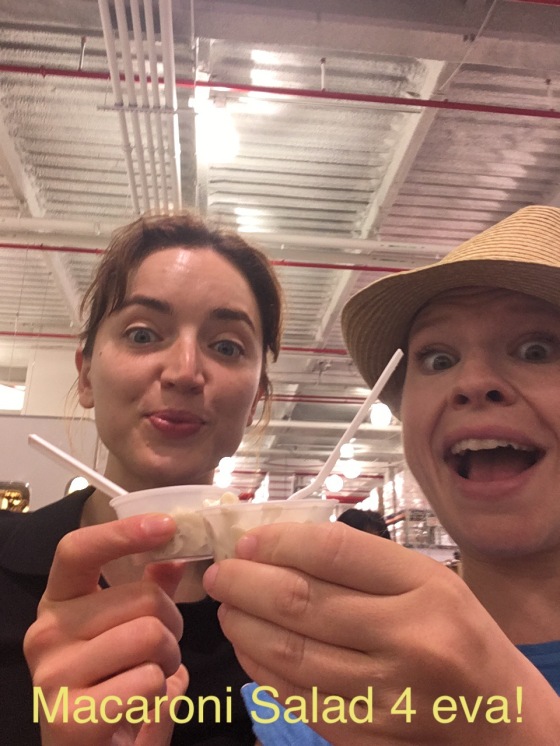 From Left to Right: Anelisa (new friend who can get me into Costco…as long as I wear a fedora and pretend to be her Aunt Maybel, macaroni salads, Me)

So there you have it folks. My boring summer has gotten a lot less boring, and has given me a new catch phrase to try out…“because with friends like these, who needs xanax?”