Hey there adoring fans (Nancy Braun….sorry my post yesterday was dedicated to you but my phone auto-corrected your last name to Brain)!

So, as I said in my (shabbily written) post yesterday.  I’ve reread The Secret, by Linda Byrne.

You see, back in 2007, I read The Secret just like every other depressed middle age housewife (I was a 24 year old tap dancer) that saw the book featured on Oprah (because if it’s featured on Oprah it must be good… and be the perfect solution to my 24 year old problems… and might turn me into a fabulous black woman…with a billion dollars).  At that time, the book’s philosophy brought me all the things I wanted in my life.  Within 6 months I got: A hit Broadway show, a Broadway salary (which was the most money that I believed any one person could possibly make…until I opened my bedazzled eyes to realize there’s a great big world out of there full of people making a lot more money…you know, like people that interview celebrities and have 4 golden retrievers and audience give aways…oh wait…I’m back to Oprah again aren’t I?  Well, there’s tons of other people that make more money than Broadway chorus girls…without bum right knees…and health insurance…I digress….back to the list of things I got), a hot boyfriend, and a smokin’  bod.  I figured that since the world didn’t end and my blog is now about making my life a little better one day at a time, I would give the old Secret another shot.

2.  Visualization: Visualize everything that you want to happen and it will happen to you.

In order to go along with any of these ideas you definitely have to drink the Kool-Aid (side note: I had to explain to a fellow shot girl what the expression “drink the Kool-Aid” meant last night…you know, stuff you have to embrace when you’re the oldest living shot girl in Manhattan and all of your co-workers are too young to know of such cult suicides).  So, I’ve been testing out these 3 tactics for a few days now, and it’s kinda cool the s*it that can happen (either by my powerful positive brain…or mere coincidence).  I swear I made a D train come on the 59th street platform (by visualizing it) yesterday when I was running late to work.  And by using The Law of Attraction, I’ve been pretending that I have plenty of money (which we all know that I’m as rich as a common hobo) I got 2 really easy quick paying job opportunities (…no Mom…I’m not a stripper…jeesh).

Buy a cork board preferably in a girly shape, ’cause you’re a girl dammit! 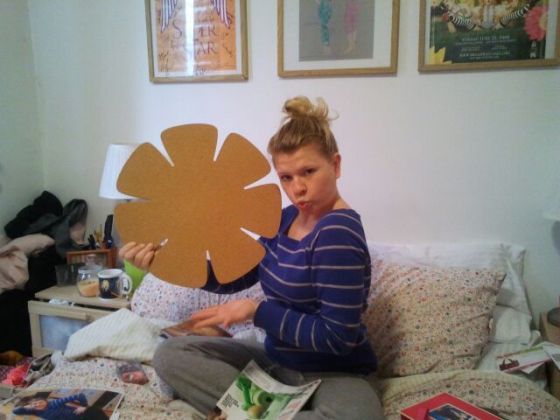 Cut out inspiring sayings from your girly magazines (or gentlemanly magazines…whatever you hoodlums read is fine).

Download and cut out pictures of people, places, or things that inspire you,

like this pic of Carrie Bradshaw here.  Making enough money to afford that $4,000 outfit by typing on her computer a few times a week…hmmmm….

Find some pictures of you when you were really happy with the way you felt and looked.  Here’s me at the beach with Ruby…when I was 400lbs (10lbs) fewer…and had probably already drank 47 miller lites….those were the days.

PS: I also cut out this picture of Carrie Bradshaw’s bedroom (when she reclaimed her life after Mr. Big…douche) because that’s what I’m going to model my bedroom after.

(side note: I printed that picture for my hot boyfriend that I mentioned earlier. I casually showed it to him (along with a bunch of other decoy pictures of course) hoping that he would ask if he could keep it, frame it, and put it up in his bedroom to admire everyday how hot and awesome I was…he did not…so now I just have this picture of me in a bikini while holding my dog and beveling hanging out in my apartment.  Time to put it to good use!)

Look how much fun vision board making can be!

Now that you have your finished vision board… 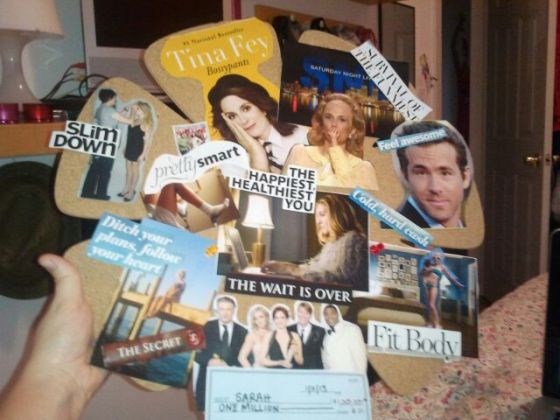 Yes.  That’s a picture of Ryan Reynolds in the corner.  Don’t judge me.  You ladies know what I’m talking about (and based on my readers…probably quite a few of you men do too).

You can move onto Step 5

Pick a spot on the wall to hang your vision board.  Somewhere you will see it every single day (just be sure to test it out first…so you don’t have to put 2 holes in your drywall because it was hanging too close to your closet…whoops).

Now you’re all set!  Just make sure to look at it every day and really believe, drink the Kool-Aid!  (No, not literally drink Kool-Aid Megan.  Were you paying attention to anything I just said?  No, I’m not mad, just disappointed.  Why yes, you have sold a lot of red headed sluts tonight.  Good job!  Now run along) that those things are coming your way.  All you have to do is be positive…and maybe get your fat ass to the gym. 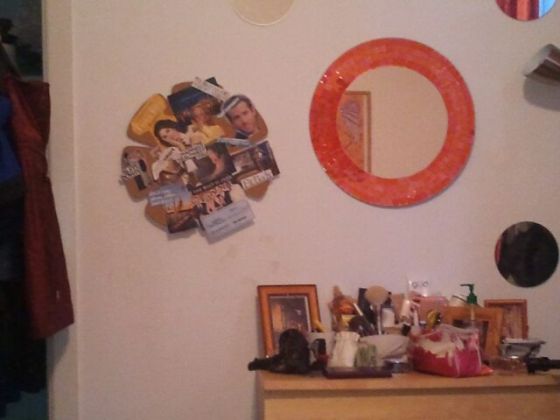 Let’s see what happens if I look at this everyday for 66 days. Hopefully I will make out with Ryan Reynolds…not turn into him (yes, I know he’s married Mom…jeesh!)