Guess what?  Tonight I tried to win the Wicked lottery again.   And again, I didn’t win.

So what did I do instead?  On this Friday date night with myself (because all of my friends are stuck in Queens with no way to come play with me)?   I did my favorite thing to do in Times Square….

I RODE THE ELEVATORS AT THE…

Now, too understand my love of the elevators at the Marquis (and why I had to ride them again before we all explode…or don’t explode and nothing happens), you must first hear about my very first trip to this city.   At the age of 11 (don’t worry, this is not a long story), my parents (after weeks of begging) allowed me to come to New York City for 10 days over the summer with my dance teacher and 2 other girls from the studio for the Dance Masters of America Convention.  It was my first time traveling anywhere without Mom and Dad and I was thrilled (I love you John and Susan Hicks)!  We hopped in a cab (which was super cool at the time…a little less cool now during Hurricane Sandy when the trains are down and your only option is to battle fellow New Yorkers to the death for a cab downtown…I digress), from Grand Central Station to Times Square and arrived at the Marriott Marquis.  Tall men in burgundy suits took our bags (bellhops, not stylish robbers as I had originally thought), escorted us to the front desk where we were given computerized room keys (which was the wave of the future in 1994) and pointed us to the elevators making sure we were aware that our room was on the 44th floor(!).  Now, to an 11 year old from Elkridge Maryland, any building that has a 44th floor is unfathomable (I mean, Towson Town Center only had 4 floors and a Rainforest Cafe).  Were my ears going to pop?  Yes.  Was my nose going to bleed?  No, nose bleeds have nothing to do with heights. Would I be high enough to shake the hand of God?  It depends on who you ask and in what context you are using the word high.  We then made our way to the elevators and discovered the most amazing thing…

The elevators were made of glass…just like Willy Wonka and the Chocolate Factory (but not really)!

So, to get a full understanding of how cool these elevators are… here’s a picture! 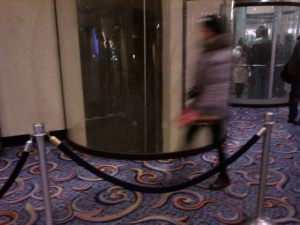 Hold on, let me find a better picture….

Look at how magical these elevators are!  They always put me in a “I feel like I’m a Jetson,” kind of mood.

So, after I ear-popped myself to the 48th floor, I decided I’d sit and have a cocktail at the revolving lounge.  You probably have already noticed that most (all) of my blogs involve cocktails.

And here’s a pic from of the view.  Isn’t it incredible?

Hold on, my stupid flash is on the fritz,  let me take get a better pic.

Ahh…here it is.  And to imagine, no one below 24th street has power right now, and I’m being revolved at 20 megahurts per second (that is probably a lie…I have no idea how to measure the speed of revolsion…revoulution…spinning…oh, whatever) .

Next, with my new found love of whiskey, I ordered a Gentleman Jack.  Delicious!

“Oh, and waitress, you can take that other cocktail napking away.  I’m going to die alone….I mean, it’s just me for right now.” 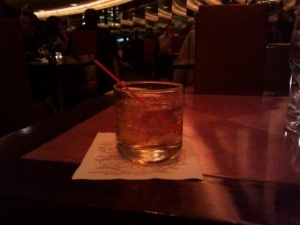 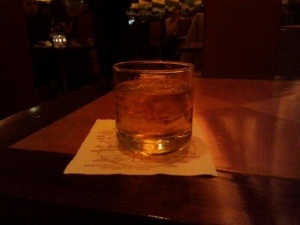 I had another awesome day doing 3 things that I love: riding glass elevators, having a cocktail, and enjoying New York City.

I was having such a splendid time that I asked a tourist to take a picture. 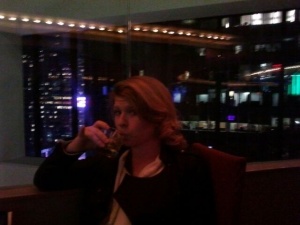 “Oh sweetie, could you turn the camera the other way?  I tend to photograph better in the vertical.” 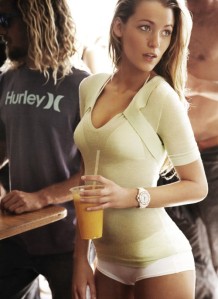