Sorry I’ve been absent for a few days.  I know!  You all want to find out what life is like after the ballet class that I wrote about in my last post.  This post isn’t about that, but I can give you “just the tip” of what life feels like after ballet class: pain, suffering, happiness, fulfillment, a few depressing body issues, and thirst…for a beer (to dullen the pain of body issues…which probably worsens the body issues because instead of opting for a light beer that tastes like a mixture of donkey pee and deceit or even a glass of I don’t know…water…you have chosen to pick an IPA that has at least a 6% alcohol content and tastes like a mixture of denial and that carpenter from 2007…no I don’t have a problem…so stop asking…).  Now let’s move on.  My bedroom/office renovation is in full swing…and is taking FOREVER.

Last week, Abby and I headed to Home Depot on 23rd street to buy some paint.  As I have previously mentioned on Day 12: The Vision Board (you haven’t read that post?!  Usually this is the part where I get angry at you and say that you’re never going to become an adoring fan that way, but I’m now realizing that I probably shouldn’t scold the 14 readers I have and just update you that on Day 12: The Vision Board….I created a vision board) I decided to remodel my bedroom after Carrie Bradshaw’s bedroom in the Sex and the City movie.  (yes, the first one…duh).  I was lead to this decision by a few variables.

1.  My friend Rebecca entered my birthday into some sort of Chinese website and found that water was my best element, (and Dog is my animal…who knew?  That guy that I let get to 3rd base in the bathroom of a PF Chang’s said I was such a boar…get it?  Play on words?   Boar and bore…they’re not all good.) so blue would be a good choice.

2.  I think the color blue is pretty.

3.  Carrie Bradshaw made-over her life after moving on from Mr. Big, and I’m conducting a makeover on myself after moving on from (hopefully) the rat race of career choices that are no longer fulfilling my life.  Plus, Carrie presumably gets paid a ton of money to write about her life which sounds pretty awesome to me.  What?  Carrie Bradshaw is a fictional character played by Sarah Jessica Parker and could not have possibly made enough money writing a weekly column to have her own studio apartment and dress like a Russian debutant hooker?  Well, theoretical voice, on my Vision Board she can and does…and that’s all it takes for the power of positive thinking.  So BLAM!  Back to painting my room blue… 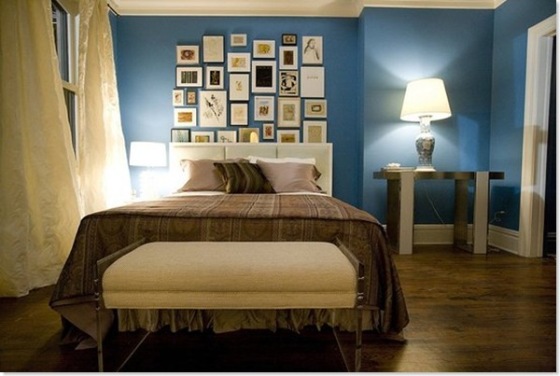 So, as I was saying, Abby and I headed down to Home Depot on 23rd street (which sadly didn’t have a hotdog stand in front of it like they do in my hometown…I know, I don’t eat meat. I can still enjoy the ambiance of a hotdog stand) and picked up some paint. 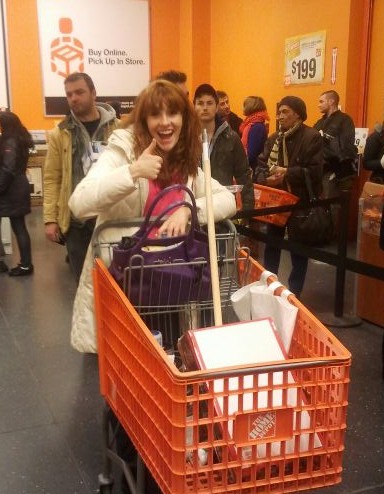 This is the color of my future…The Isle of Carpri…. 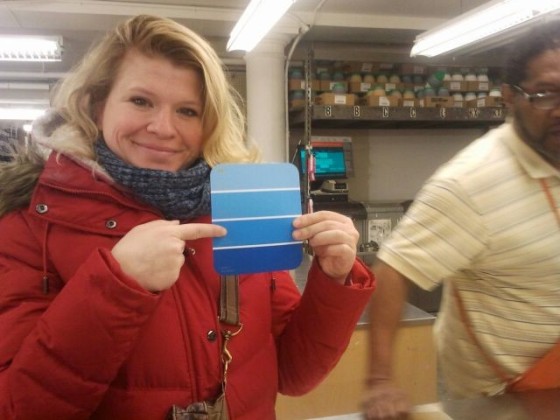 I know what you’re thinking ladies and the answer is YES!  I did give Gary the paint guy/photo bomber my phone number.  Sometimes you gotta play to win (I did not give that dude my number and his name is not Gary (probably)).

Unfortunately, I have not budgeted my time wisely with this whole “paint your room like Carrie’s so you can quit your day job and become a famous millionaire by writing about seemingly sassy (man hunting) and a tad bit boring (trip to home depot) adventures.”  Cause, before you paint, you have to do a lot of s*it like clean behind all of your furniture that you haven’t cleaned behind since you moved into the apartment 6 years ago.  Dang! 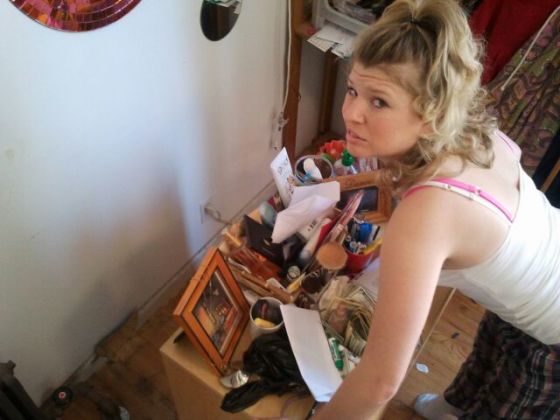 Not too bad, not too bad.  Just a few pennies, 14 bobby pins, my dignity and some big ass dust bunnies… 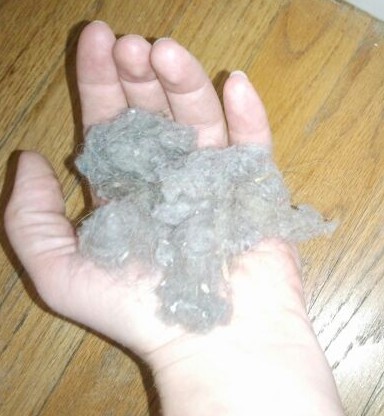 Pretty gross, huh?  Now, if I were a boring person, I would just toss this in the trash and go about cleaning.  As you can tell, I’m not a boring person.  I’m a super creative as well as highly sophisticated person.  After returning from the arts and crafts table, I turned our little friend here into… 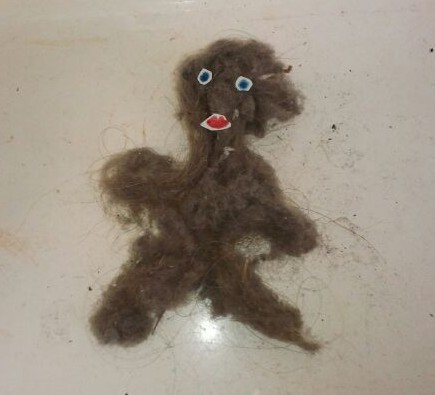 Readers, I’d like you to meet the newest member of the SixtySixdaysofSarah team, Dusty!!! 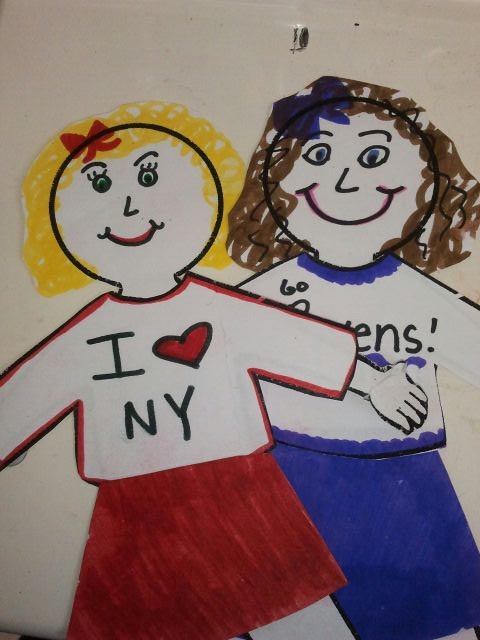 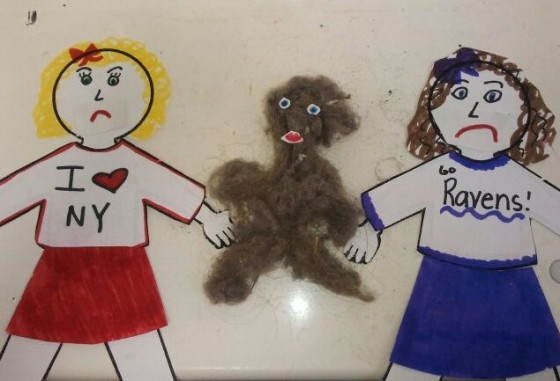 Awwwwww…you guys look great together.  Now that Dusty is out from behind the dresser, let’s paint this mofo. 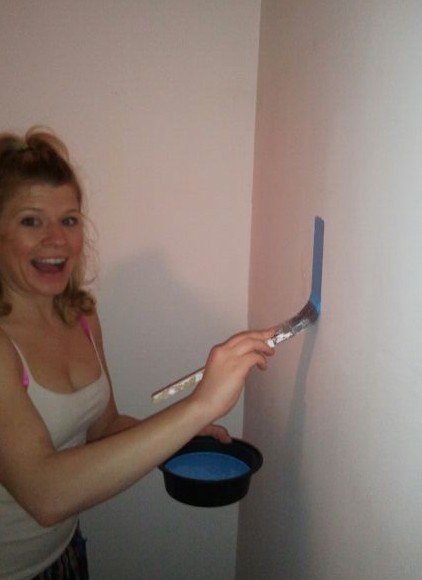 I’m still painting this stupid stupid room and it feels like I’m reading that last book by Dan Brown.  Where it takes forever to finish and the ending blows and you wish that you had gone out for 14 brunches instead because that’s how long it took to read (and I’m talking those all you can drink brunches where you pay $23 and have an omlet and 19 bloody mary’s and take up the table for 4 hours and then the server hates you, but then likes you again after you tell him how you’re so surprised that he didn’t book that job at that audition you were both at because his pirouettes were fierce….those kind of brunches).  Painting was becoming uber frustrating.  Especially when I went to paint the top corner of my closet… 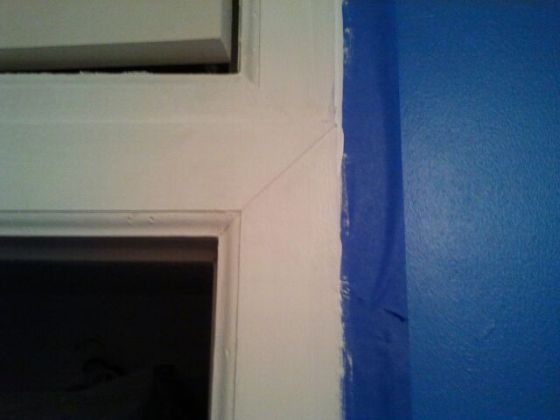 I  mean I know the paint brush should go with the grain of the wood but what happens at the dang  corner?!  Do I go horizontal the whole way?!  Or vertical!?  Or try to go diagonal at that diagonal line?!  And why the Hell did I get painting tape the same color as my paint?!  And why didn’t you turn the radiator off before you got on the ladder that’s directly above the radiator?! How stupid can you be Sarah?!  You’ll never be like Carrie Bradshaw!  She probably hired painters to do it for her so she could go out and teach Jennifer Hudson life lessons about love (and possibly suggest that she join Weight Watchers so that one day she could look like a Somalian orphan…am I right?   She’s mad skinny now…it’s like I expect to see her in a hut made of clay with a fly landing directly on her eyeball at the exact moment that the camera pans to her to get you to pay 9 cents a day…too far?  I’m just saying she’s skinny is all…I digress).  I was getting so worried that I was going to destroy my new bedroom/office that I almost gave up.  But then I felt a little tap on my shoulder and turned around… 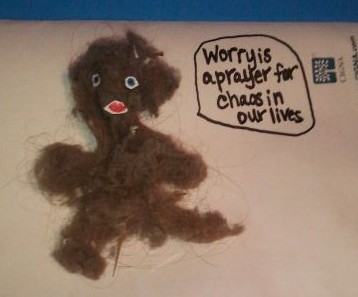 Thank you Dusty.  You’re so right. Worry is the prayer for chaos in our lives!   I shall worry no more Dusty.  It will all be ok.  Hey Dusty, how did you come up with that quote when I only created you 23 minutes ago from the dust bunnies behind my dresser?  I guess we can talk about it when I tuck you in tonight.

And with that… I have completed 2 whole walls in my room. 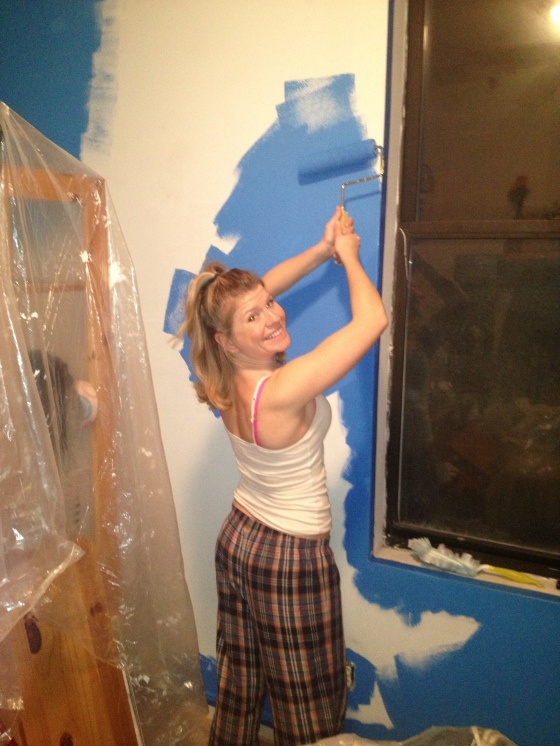 See you guys on day 192 when my room is completed.

PS: Special shout out to friend Rebecca the self proclaimed “Paint Nazi” for helping me out!

She’s allowed to say paint nazi because she’s half jewish.  And toured with the musical Cabaret. 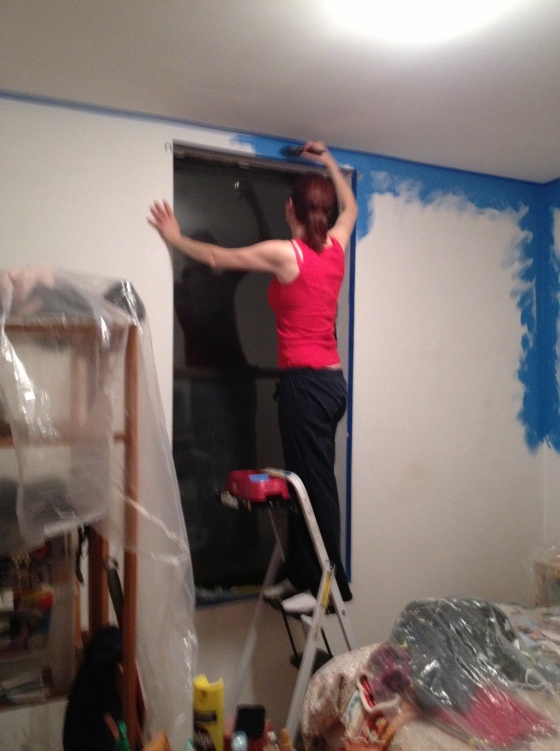