From Wikipedia, the free encyclopedia:

YOLO is an acronym for “you only live once“. Similar to carpe diem or memento mori, it implies that one should enjoy life, even if that entails taking risks. The phrase and acronym are both used in youth culture and music, and were both popularized by the 2011 song “The Motto” by Canadian rapper Drake.

At first, my roommates and I thought maybe the pilot light in our stove was out.  The following morning, we found the letter that had been slipped under our door.  Our building had a gas leak and the gas would be shut off for a few days until it was repaired.  For our convenience, the building owners would be providing us with hot plates.  Wow.  “I guess they’re really starting to look into this stuff after that building went down,” I thought.

Disclaimer: On March 12th, a building exploded in Harlem on 116th and Park Avenue.  8 people were killed and 70 were injured 1 mile away from where I live.  People in my building heard the BOOM. 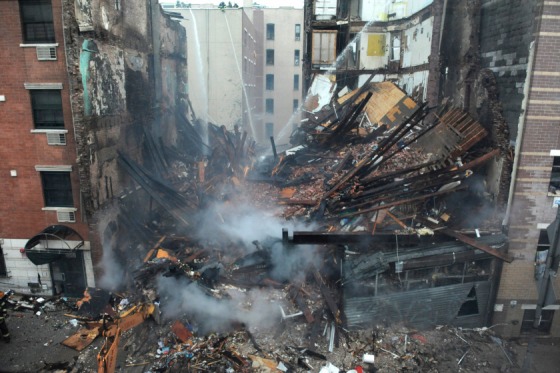 We went on our merry gass-less way microwaving food and air drying our clothes.  It was slightly annoying, but bearable.  It wasn’t until I ran into my super a few days later that I realized the magnitude of the situation.  “It wasn’t a question of if we were going to blow up…it was a question of when.”  Turns out our building had several more leaks than expected and the pipes (that have been in our building since it was built over 79 years ago) were leaking into the walls all the way up to the top floor.  We were essentially a ticking time bomb.

What do you do with that information? Feel overwhelmingly guilty that other people had to die so that our building with similar billion year old pipes was looked into?  Decide to grab life by the horns and register for naked sky diving lessons?  Have 27 one night stands?  Liquidize your 401K to finally take a trip to the top 23 places to see before you die that BUZZFEED is always making you look at?

I mean, WE COULD HAVE DIED!  But then I suppose, we always could have died.  Buildings have gas leaks, bus drivers have blind spots, people have guns, and brains have tumors.  We ALL could die at any moment.

But what do you do when you didn’t?

I don’t think, for me at least, the answer is to do something incredible. I think I’ve been trying for so long to do something incredible i.e. star on Broadway, meet prince charming, host the Oscars, or just write something Nobel Prize worthy.  Growing up in the wonderful generation that I have had the privilege to grow up in, we were all told we could be the next President.  You can do whatever you put your mind to!  I sure took that mantra and ran with it for 30 years.  I’ve always aspired to be great.  But as I’m getting older and wiser, I’m learning that for me, all that inspiration is too much.  It’s misguided me a little bit about what I really want.  One of my dreams has been to be the next Ellen Degeneres.  I admire how she helps the world feel better with humor.  But the trick is, I don’t need to have 10 million viewers and take selfies with Meryl Streep to make the world feel good.  I put on a silly voice and play kill the cockroaches every Saturday morning while teaching 6 year olds in tutus how to frappé.  I almost made one of them pee their leotard last week because she was laughing so hard.  If our building had exploded after that day, I’d have been content.  Instead of pushing and pushing and pushing for what I once thought was something incredible, I’m now realizing that I already have it.  So yeah, those 23 places that everyone should have to see before they die sure do look amazing on BUZZFEED, but sitting on my couch in my gas free apartment while looking at pics sent to me of my newborn nephew is what really makes life worth living.