Let me tell you all about Tina Fey!

Psych.  I have to head to an improv show so I’ll just post this exciting event that happened on Monday.  Stay tuned for Tina Fey Thursday!

So last week I finally sat down (with a bottle of wine) and wrote down some concrete goals for myself.  Immediately after, I regretted it and threw up (I didn’t throw up).  I mean, who says they want to be in the movies?  7 year olds, Teen Moms and the contestants of the new celebrity diving reality show SPLASH, that’s who.  I’ve always enjoyed what little acting I’ve done.  It was always just a line here or there in a musical which usually sounded like “Hey Zippy!  Which way to the Sock-Hop?” or “Oooohhh-oh-oh-ah-ah-ah” (I played a gorilla in Tarzan…not a hooker in a porno…I could see how that phrase could be misleading).  So the Oscars Sunday night were super inspirational (70% of the Oscars on Sunday night were super inspirational).  So I said to myself “Sarah, you pansy, it’s time for you to get your ass out there and start pursuing that dream.  One day you could be joking around with Meryl Streep, lip syncing All That Jazz or challenging Adele to an “F” verses “Th” debate.  In order to make this goal happen you’re gonna have to stop finking about it and get off your ass and do that s*it!”   So I started using my positive thinking powers and the laws of attraction to have an on camera job fall in my lap, and you know what?  It did!  Not really.  Well kinda. My friend Joanna asked me to come along to help her with some behind the scenes work for a shoot of her vaudevillian-silent-movie-webisode, and I was happy to help.  Then (as luck would have it) one of the small dogs that Joanna had cast had bailed on the shoot.  And lucky me…my small dog was camera ready*.

Here is a slide show of how it all worked out.

For you normal people…

I’m so excited!  My dog is going to be famous! 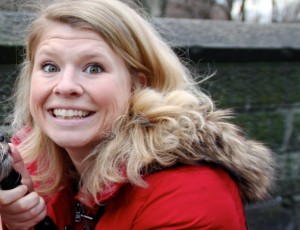 “Ruby!  Get your s*it together.  You’re gonna be a star.  This could by your big break!  Oh, these cheek bones!”

“And of course it had to be humid today…”

“What do you mean you don’t want to be a star?  What the HELL is wrong with you!?” 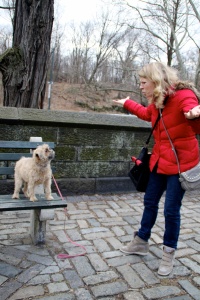 “How else am I going to become a famous actor?!  What, am I supposed to do?  Pay for an acting class?!  That s*it’s expensive!  You have ruined me and brought shame to our family!” 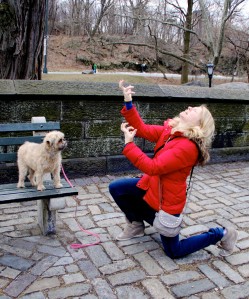 “You know, this hurts me way more than it hurts you…” 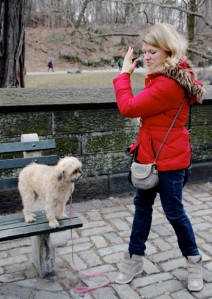 But eventually she got the hang of it.

“My daughter can do it!”

“Ever since she’s been here to see how little there is to it.”

“Well, come on, get your makeup on, there ain’t much time!”

“Not too much makeup, baby.  Young and girlish.  Pure.  Don’t smear that junk all over your face like they do.  You just keep your mouth the way the good Lord made it…you’ll be a lady: grand, elegant…with a classy lady like walk.”

“Oh no— your hair’s all wrong.  You can’t just let it just hang like spaghetti.  Put it up!  It’s got to have class!  Fluff it out in front.  Thank God, the Lord gave us good color — and that you washed it this morning…”

“Baby, it’s all right to walk out when they want you.  But you can’t walk out now when after all these rotten years, we’re still a flop.  That’s quitting.  We can’t quit because we’re a flop!”

“I’ll take this to the conductor.  Just remember.  You are a lady.  And you are going to be a STAR!”

And eventually, she got the hang of it!

In conclusion…I’m well on my way to starring in feature films.  Just as soon as this web series goes global and my dog becomes famous.  Then the offers will come pouring in, and eventually Spielberg will learn that the owner of that adorable little “naturally curly haired” dog belongs to a fabulous owner with a background in theatre and copyright infringements.  In just a few short months this video will be edited and my Ruby will be featured for a solid 15 seconds in a web series that already has 500 hits on Facebook…and my dear Arthur Laurents will roll over in his grave.

And foshizzle check out the first episode of this web series.  Even though neither Ruby or myself is in it, it’s pretty awesome and features my roommate and some other great and talented friends.

*This story is a big lie.  Joanna had asked me weeks ago if Ruby could be an extra on the show and I said yes.  But this way is better, no?

PS: Big shout out to my fellow cast mates from the Broadway revival of Gypsy.  Because one time I was on Broadway.